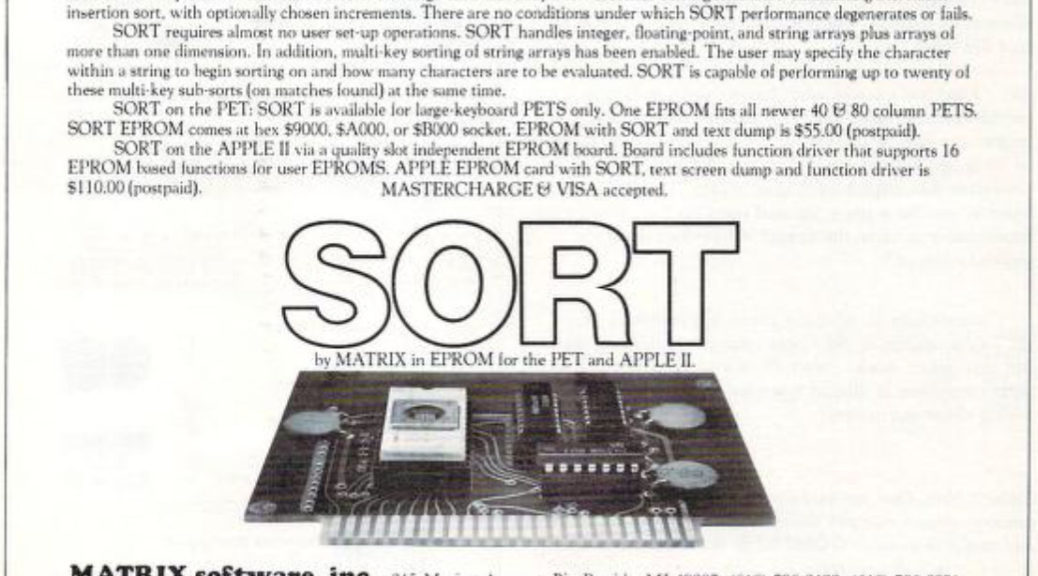 In my primary school years, I’d read my Dad’s “Compute!” magazines. Recently, I discovered they’ve been published on Archive.org https://archive.org/details/compute-magazine , and I browsed through a few issues.

It’s a sorting algorithm, written in assembler, distributed on an EPROM chip, mounted on a circuit board, that you’d plug into your Commodore PET or Apple II computer and call from your BASIC program.

I few things I find interesting about this ad:

When it was revealed that the massive Equifax breach in 2017 was attributed to their failure to patch a component in their system known as ‘Apache Struts’, everyone was reaching out to their development teams and asking: “Do we use Apache Struts? Is it patched?”

And I found it interesting. In my opinion, the wrong question was being asked.

What they should be asking us (and what we should be doing) is:

There has been an interesting news story recently about how a specific company was a target of a cyber-attack through a library it used. A malicious actor planted a back door in a library it was known to use – some good assessments of the incident have been posted on Ars Technica and Linux Weekly News.
https://arstechnica.com/information-technology/2018/11/hacker-backdoors-widely-used-open-source-software-to-steal-bitcoin/
https://lwn.net/Articles/773121/

Most development teams don’t have the capacity to audit the source code of all the libraries they use. Further, it would seem that in this instance, the malicious code would have passed a cursory review. At this point, our best defense is to be aware of this possibility when assessing a library, ensure that it has an active community and is well supported prior to incorporating it. Once a library has been incorporated, ensure we track its development for updates.

When Paul Allen, the co-founder of Microsoft, died in October, I decided to read his 2011 Memoir, Idea Man. I thoroughly enjoyed the book.

In 1994, Paul Allen hired Bob Whitsitt as the Trailblazers general manager, to rebuild the team. Whitsitt focused solely on basketball skills in his hiring.

What follows is a cautionary tale for anyone building a team – skill is critical, but it’s important to consider team fit, character, balance, diversity, resiliency, empathy, etc… The following passage from the book describes one of those worst-case scenarios of a team built solely on skill:
Whitsitt proceeded to overhaul our aging roster as he’d done in Seattle, drafting young athletes with upside and adding big-name veterans.
…
He openly professed that he cared only about talent, to the exclusion of character and other intangibles. “I didn’t take chemistry in college,” he told the media. With enough physical ability on the floor, team cohesion would take care of itself. It was a risky assumption for a sport in which five men share one ball.

With hindsight, Whitsitt temporarily staved off decline by using my wallet to load up on pricey long-term contracts, players who were available because they were overpaid or had off-court issues or both.
…
When you come so close to winning a championship, as we had in the early nineties, it makes you that much hungrier because you know what the Finals taste like. It was the same for Whitsitt, who was desperate to validate his approach with a title. We were perpetually one big-salaried veteran away from contention, and our payroll ballooned. Deep down I knew that something was wrong. In the playoffs, when the pressure peaks and higher-caliber opponents target your weaknesses, a player’s makeup is revealed in performance. In the 2000 Western Conference Finals against the Lakers, we fell behind three games to one and then fought back to earn a deciding seventh game. Up fifteen points in the final quarter, it looked as though we were headed to the NBA Finals against Indiana, whom I thought we could beat. When I watch my team in the playoffs, I get superstitious; I try not to think about how much I want to win. Whatever happens, I’ll be fine with it. The players tried their best. But in that fourth quarter, I succumbed. I couldn’t deny it. I really wanted to beat the Lakers.

Within minutes, the Blazers unraveled. We missed thirteen consecutive shots. Our players suddenly looked as though they’d met for the first time that morning. The coup de grace came when Shaquille O’Neal dunked an alley-oop from Kobe Bryant with forty seconds left.

That seventh game exposed us as a team without leadership or discipline. I’ll never forget the feeling I had when we boarded our plane, still festooned with BEAT LA stickers, and headed home, our season done. It was a crushing defeat, and it took me a long, long time to get over it.

IN 2002, EIGHT years after Whitsitt’s arrival, we fell into the abyss. We led the league in payroll at $106 million, $44 million more than the championship Lakers. We were $65 million over the salary cap and $50 million over the league’s new luxury tax threshold, which had been designed to level the playing field for small-market teams like ours. Our player salaries cost us an outrageous $156 million, all for a medium-to-good fifty-win team that would lose yet again in the first round of the playoffs.

Off the court, it was worse, as the Trail Blazers became exhibit A for all that was wrong with professional sports. I found myself reeling from one lowlight to the next.

November 9, 2002: Bonzi Wells is suspended for spitting on the Spurs Danny Ferry.

November 22: Co-captains Damon Stoudamire and Rasheed Wallace, on their way home from a game in Seattle, are pulled over and cited for possession of marijuana. To settle the case, both agree to attend drug counseling sessions.

January 15, 2003: Rasheed is suspended for threatening a referee.

April 3: Zach Randolph is suspended after sucker punching Ruben in the face during practice and fracturing his eye socket.

The fans who felt so close to the Drexler-Kersey-Porter Blazers were disenchanted. Our attendance suffered, and our TV ratings fell by half. The wayward players showed little remorse. Bonzi Wells told Sports Illustrated: We’re not really going to worry about what the hell [the fans] think about us. You could see why parents weren’t rushing out to buy Bonzi or Rasheed jerseys for their kids.

One day I said to Whitsitt, “What’s it like in the locker room? How is the team reacting to the latest incident?”

I’d heard enough. A team might be able to absorb one erratic personality, but who could win with a group that was half crazy? Three days after our season ended, I fired Whitsitt and gave his successor, Steve Patterson, a mandate to clean house. We traded established starters like Rasheed and Bonzi for forty cents on the dollar while letting bad contracts expire. The win-now regime had stunted younger talents like Jermaine O’Neal (who blossomed into a six-time all-star after being moved to Indiana), and our cupboard was bare. In 2004, the Blazers missed the playoffs for the first time in twenty-one years.

And then we sank even lower. An internal investigator came to me with a report on Qyntel Woods: “We think there may be dogfighting at Qyntel’s house.”

Dogfighting? I couldn’t believe what I was hearing.

A few days later: “We think there may be some dogs buried in his yard.”

Buried in his yard?

And a day or two after that: “There’s a room in his house where we hear the walls are covered with blood.”

Blood on the walls?

I was shocked and mortified. Qyntel eventually pleaded guilty to animal abuse and got eighty hours of community service. We suspended and then released him three months later.

The next year we touched bottom. With a record of 21-61, the Trail Blazers were indisputably the worst team in the league. Though things were quieter off the court, I had a new challenge: how to pay for my team’s home court.
…
As we discovered too late, the financial formula was fatally flawed. Add a local downturn and an unpopular losing team, and we had a perfect storm of red ink and disaffection. The Blazers were getting booed at home, once unthinkable in Portland. Our season ticket holders were canceling in waves amid calls for a boycott, despite our explicit efforts to rebuild and start over. All told, I’d invested more than half a billion dollars in the franchise, at a huge net loss. Something had to give.