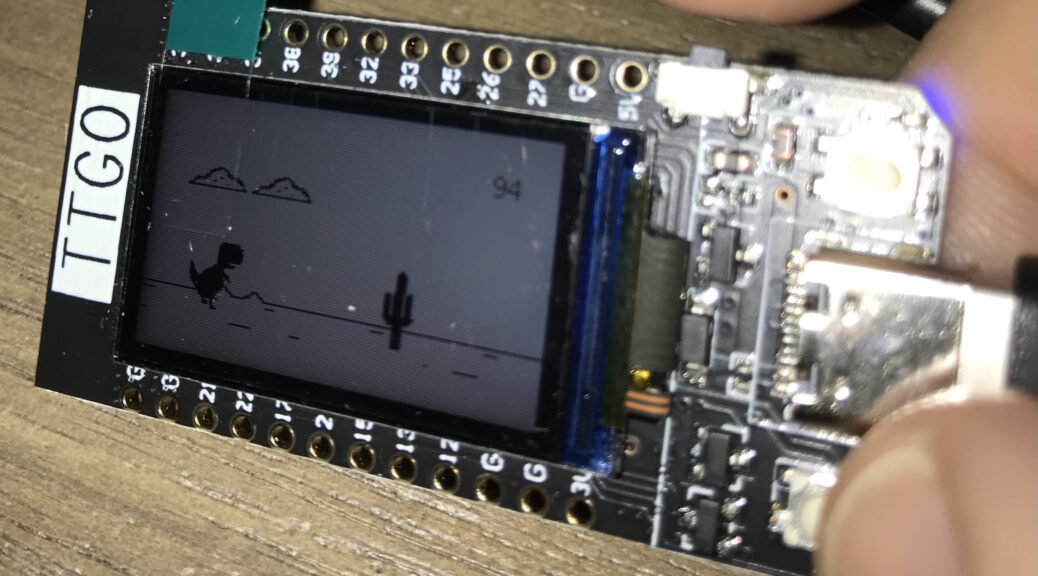 Ever since the Espressif’s ESP8266 wi-fi capable microcontroller was launched, I’ve been thinking about all the possibilities for low cost network connected devices. And, nothing world changing, but I have used it to build a data logging CO2 monitor and a device to control my old TV with Alexa.

I have been thinking of NEW possibilities as I see development boards with the ESP8266’s successor, the ESP32, with a small screen, for less than $20CAD shipped from Aliexpress. What can I build with a really tiny internet connected dashboard? So I ordered a Lilygo TTGO.

A day after it arrived, Hackaday published an article about a re-creation of Google Chrome’s T-Rex game for this TTGO dev board. Getting that loaded on to the board seems like a good test. I downloaded the TRexTTGOdisplay and installed Lilygo’s TFT_eSPI driver, compiled and…

Hmm. I search around, and I see a hint in the comment’s of the author’s Youtube video: “You will need to update tft library”. I find the source of the TFT_eSPI library, review it a bit, and see that it is designed for a number of microcontrollers and screen controllers – so I copy the User_Setup_Select.h from the Lilygo repository to Bodmer’s most recent TFT_eSPI libary. For anyone doing this now, this will fix the TFT_eSprite::pushToSprite issue and just work… but I got:

I take a look at what’s happening around line 3289 in TFT_eSPI.cpp, and it appears to be optimization code for the RP2040 – it shouldn’t be compiled in… Taking a look at line 3285:

See that exclamation point? And everywhere else in the code there are RP2040 optimizations, I see:

Cool, I’ll submit a patch. So I fork the code, and… I don’t see the bug, it’s already been fixed.

I was hoping for another successful contribution to open source, but I was beaten to the punch – if I had started this project a day later, it just would have worked with the latest TFT_eSPI library. In any case, the important thing is, I got TRexTTGOdisplay running. My next project for this dev board will be a little internet connected dashboard.