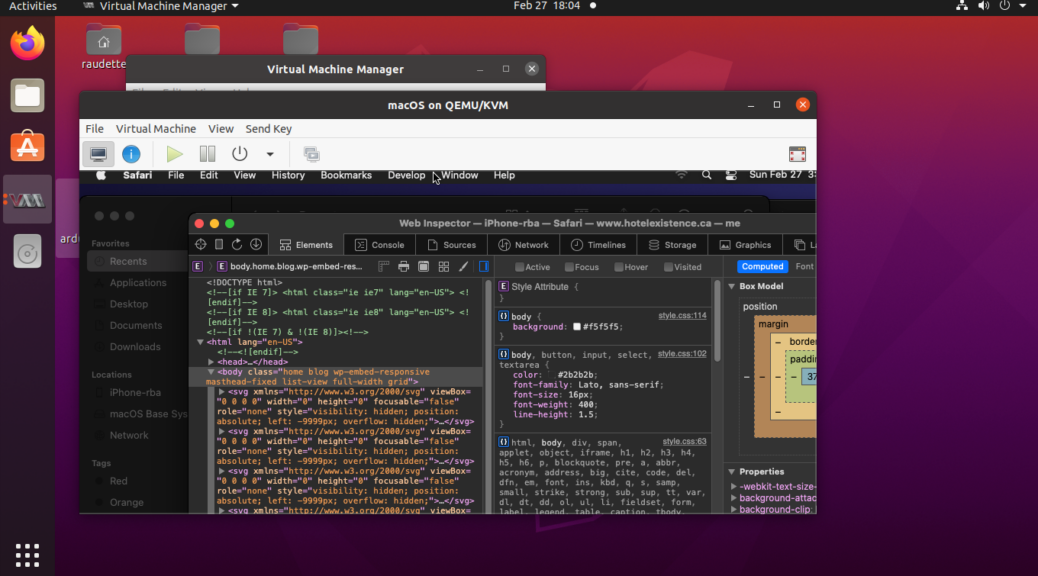 Ever since I first read about Hackinthoshes, I’ve thought about building one. A friend of mine edits all of his video on a purpose built Hackintosh. I never did build one – for myself, I like to run Linux, I don’t really need a Mac for anything, and I find that off-lease corporate grade laptops are the best value in computing. But, every once in a while, I have something I want to build on my iPhone, and a Mac is like a dongle that makes it possible.

Simple things, like finding out why the site I’ve built with the HTML5 geolocation API will work on my PC, but not on my iPhone, are just not possible without a Mac. To solve these types of problems in the past, I’ve just borrowed a Mac from the office.

Recently, another project came up, and I decided to try to build a virtual Hackintosh with OSX-KVM – a package that simplifies running OSX in a virtual machine. Years ago, I tried running OSX in VMWare Player – this would have been on a Intel Core 2 system at the time – in my opinion, it was interesting, but unusable. My experience with OSX-KVM has been much better.

Just following the instructions, within a couple of hours, I had OSX Big Sur running in a VM. OSX-KVM does almost everything, including downloading the OS from Apple. My PC is pretty basic – a Ryzen 3400g, SSD, 16 GB. I assigned the VM a couple CPU cores and 12 GB of ram, and it’s usable.

In a few hours of dabbling around, I’ve come across four issues:

Presumably, Hackintoshes will eventually stop working as Apple moves its platform to ARM processors, but for now, it’s definitely worth trying out.

Update (2022/03/03): The Apple ID issue was addressed by following the previously linked instructions, the Chrome issue was resolved by turning off GPU acceleration (–disable-gpu).

Update (2022/03/26): I needed Bluetooth. I bought an Asus BT-400 adapter, it seems to work fine. AirDrop functionality doesn’t seem to work – haven’t investigated. And – not a Hackinstosh issue, but a Mac issue – the CH9102F serial chip on one of my ESP32 microcontroller boards isn’t natively supported by Big Sur, found a third-party driver. Apple Maps doesn’t work, as it requires a GPU, and the OpenHaystack project that I’m playing with requires Maps.